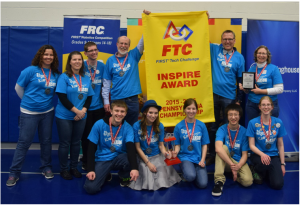 East Super Regionals was our very first multi day competition. On Thursday, we set up our pit area with as much teal as we could find, presented to the judges, and went through inspections. Saturday was our main competition day, with 9 matches for each team. We won 7 out of 9 matches, ending the qualifiers in 5th place in the Hopper division. The Hopper division ended up winning the competition, allowing us to qualify for the World Championship as the 5th place team!!! Worlds takes place in St. Louis, MO in April with 128 FTC teams and hundreds of teams from the other FIRST leagues. We are the only FTC team to be representing Delaware there.

Pennsylvania states was our last opportunity to qualify for East Super Regionals. Our robot performed well throughout the day, but we had some field and connection issues, causing us to win 3 out of our 5 matches. We nominated our mentor, Dawn Dockter, for the Compass Award and were thrilled to see our video on the big screen...and to hear that she had won! See the video on youtube here. We were then nominated for three awards, PTC Design, Connect, and Think. And then, after every other award had been announced, we were announced winners of the Inspire Award and the first team to be moving on to Super Regionals from PA states! To learn more about East Super Regionals and to keep up with all the action, visit their website!

At our second competition we no longer needed to qualify for PA states but attended for the fun experience. For the first time ever we were alliance captains and picked Flaming Phoenix and Sab-BOT-age. During awards we were happy to be nominated for Connect and to win one of our favorite awards, Think. 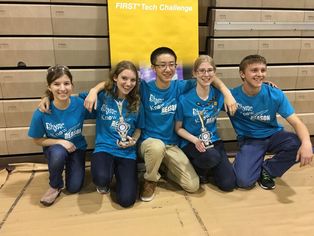 Our first competition of the Res-Q season was in Ambler, Pennsylvania. We were selected for the first place alliance by Smokin' Motors and made it to finals with them and Sab-BOT-age. We were thrilled to not only be nominated for both the PTC design award and the Think award but to win the Inspire Award! To read more about how our team and all of the other talented northeast teams did click here.
​